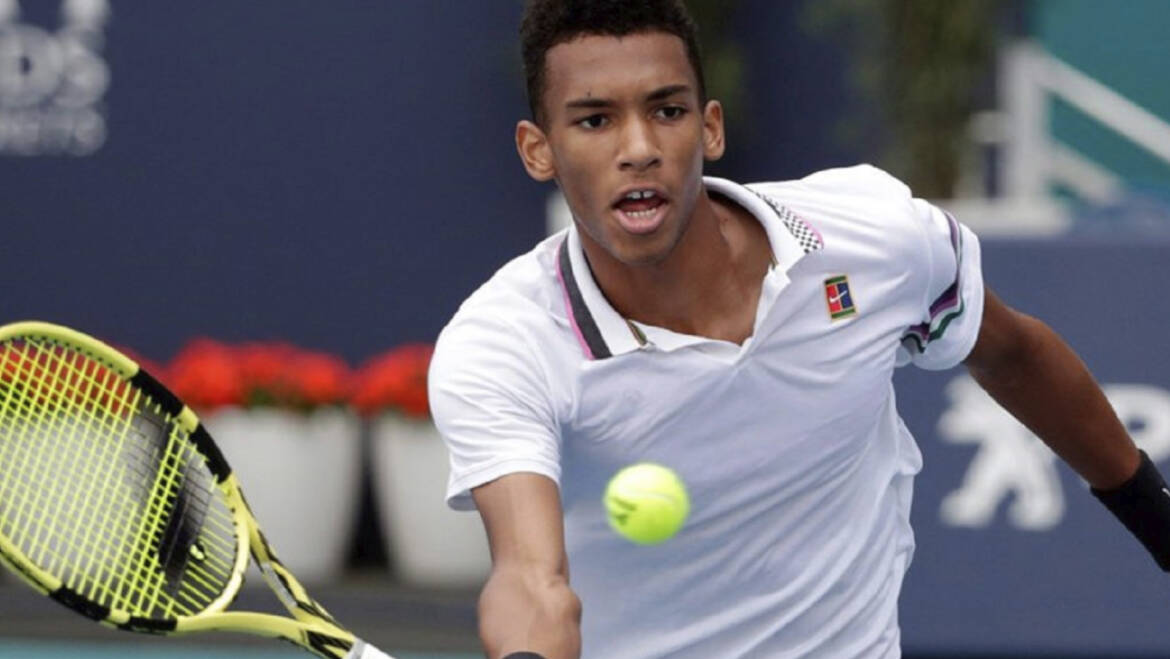 Felix Auger-Aliassime was born in Montreal, Canada in the year 2000. At the mere age of 18, Felix is the youngest player in the ATP Top 100 and has set many teenage records.

At the age of 5, Felix began playing tennis with his father. Less than a decade later and following in the footsteps of other Canadian players like Milos Raonic and Eugenie Bouchard, he joined Tennis Canada’s National Training Centre in Montreal.

In his final year on the junior circuit, Felix focused mainly on the Grand Slam events. He reached the singles finals at Roland Garros, losing 8-6 in the third set of the final! The next month at Wimbledon, he reached the doubles final with Denis and the quarterfinals in singles. At his final slam of his junior career, the US Open, Felix finished in fairy tale-like fashion: reaching yet another final in doubles, this time with BC’s Benajmin Sigouin and captured the singles title. Fun fact: in the semifinals of the Junior US Open that year, Felix defeated Stefanos Tsitsipas in the semifinals.

That year on the professional ITF Circuit, Felix captured his first professional title at the ITF Futures in Birmingham, Alabama. The following year in 2017, Felix would win his first ATP Challenger title in Lyon, France, followed by a second ATP Challenger title in Seville, Spain. 2017 would be the year that Felix cracked the ATP Top 200, making him the youngest player to do since Rafael Nadal in 2002. If you’re breaking Rafa’s records, you know you’re on the right track.

In 2018, Felix took January off due to a knee injury. Later that year, he would go on to defend his title in Lyon and win a third ATP Challenger title in Tashkent, Uzbekistan. He also began to transition to the ATP Tour. At the BNP Paribas Open that year, he became the first match winner at an ATP-level tournament born in the 2000s. He would also make his professional Grand Slam debut, qualifying for the US Open and advanced to his first ATP World Tour quarterfinal in Chengdu, as a Lucky Loser! He reached a career high nine times that year, peaking at No. 108.

The speed at which Felix has shot up the rankings is incredible. We talk about his junior career and early professional career as if it was a long time ago, however, he was just starting out on the professional circuit in 2017 – that’s only two years ago!

This season, has been Felix’s breakthrough season on the ATP Tour. In February, 2019 at the ATP 500 in Rio de Janeiro, Brazil, Felix reached the finals and became the youngest ATP 500 tournament finalist in history. The following month, he reached semifinals of the ATP 1000 in Miami. Felix is now looking to capture his first ATP Tour title. Felix currently sits at No. 28 on the ATP Tour Rankings, the third highest ranked Canadian after Milos Raonic and Denis Shapovalov. However, this week he has reached the finals at the ATP 250 in Lyon, France, and it is forecasted that he will reach No. 22 come Monday, regardless of how he does in tomorrow’s final against France’s Benoit Paire.

The question is not if Felix will break into the Top 10 or be a Grand Slam Champion, it’s a question of when. It’s an exciting time to be part of Canadian tennis!